Somehow, a year has flown by.  You spent nine months preparing for baby to grow your family.  Pregnancy draaaaags by.  You’re in love the instant you see your little bundle.  And then time starts going at warp speed, and you’re not approaching your little one’s first birthday.  Now, you’re planning a first birthday party, and with that, the first birthday session, also known as the smash & splash for HGP!

This may be news to some moms, especially if this is your first one, but not all babies love the cake smash.  In fact, I’d say that not even half of the kiddos I have in the studio for their cake smash actually smash their cake.  Some haven’t had sweets before, some aren’t used to being able to make a mess, and some just don’t enjoy the texture of stuff on their hands.  It’s super common, albeit disappointing when your little won’t cooperate.  And of the dozens of cake smashes, I’ve only had two that went face first. 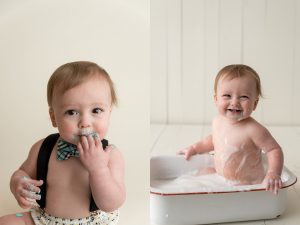 I’ve pretty much offered cake smashes for as long as I’ve photographed one year olds, especially now that I’m in the larger studio.  But not everyone knows that included with the cake smash session (besides an adorable portrait session and the actual cake) is a splash session.  After babe gets messy, we throw them in one of my old tubs and let them go to town.  It’s honestly probably the briefest part of the session since we usually run out of water as they splash it all out.  But also one of the most fun. 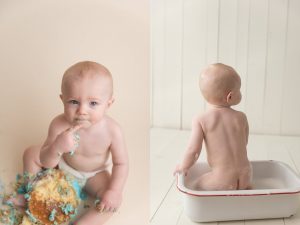 It’s without a doubt my favorite part of one year sessions.  Even the most tired crabby baby will usually have a ball splashing in the water and making a mess with the bubbles.  If I still fit in a tub and didn’t have to clean up the mess afterwards, I probably would enjoy a good splash as well! 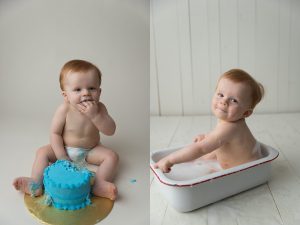 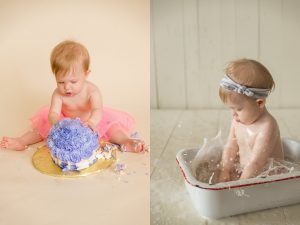 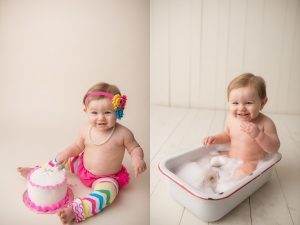