My favorite image ever

My favorite image ever.  I’d bet it’s not what you think.

If you know me- you know I have two children and a husband.  I have hundreds, if not thousands of images of them at this point (very few of which I’m in- but that’s for another day).  And while I love these pictures, deeply, deeply love them, they still don’t rank as my favorite. 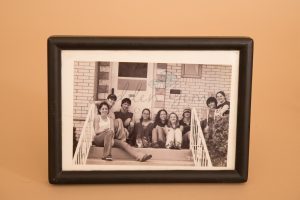 My favorite image ever

Nothing special, right?  Except this image tells a story.  That’s what photographs are supposed to do, right?  Sure, I have albums of my wedding, my family that tell our story, and images of the girls that tell our story.  This image- to me- represents so much.  It encompasses years of my life in one simple photograph.  I printed this picture more than ten years ago, and wouldn’t have guessed then how much it means to me.

This image tells a story of my teenage years, when it reality we were practically babies ourselves.  Hanging out at Dave’s house for hours on end.  The image brings me back to all of us laughing as we pushed Nick’s car out of the flooded street.  How angsty teenage years were, but how simple they were compared to adulting and raising little humans.  They were the best friends I had for years.  Even if we were to all happen to be in town together at the same time, this picture would be absolutely impossible to replicate.

The couple broke up once we all went our college ways.  Kelly (to my right) passed away.  Freddie was the love of her life and now continuing his story without her.  Jackie, her best friend is also in the picture, and eventually married Kelly’s brother (not pictured) and now has two beautiful babies. Pete, Freddie’s brother is there too (so easy to figure out the sibs).  Within this photograph lies so many beautiful, wonderful memories of my youth.  When I look at this picture on Dave’s porch, I’m literally flooded with hundreds of memories that wouldn’t otherwise come back to me if not for this picture.  Meaghan was my best friend for years.  Jen is still one of her good friends.  Dave has two baby girls of his own.

I don’t see them in the present when I see this image.  Frankly, the only reason I know anything of the present is because of social media.   If Facebook didn’t exist, I would know nothing of their lives now.  I wouldn’t even know of Kelly’s passing.  No, nothing happened to dissipate the group.  Many just went our separate ways, such is life.

I love every image of my children.

Truly, I do.  Whether it’s a cell phone grab, or I’ve pulled out all the stops, hired an assistant, or another photographer.  I love every. single. one.  I tie a memory to each one. So really, I can’t pick a favorite.  Maybe they all are.  But I’ll never be able to print every single one.  My children will never see each and every one of these pictures, nor will my grandchildren.

But this image tells part of my story that no one really knows besides the group in the picture.  A group of people that have spread all over the country and beyond.  This image represents years of my life that no one in my present or future will ever really know because it’s simply a part of my past.

So, my point to my ever wordy post?  Print.Those.Photographs.  Do you think if I had this image still sitting on a disc, or on a hard drive that’s probably crashed long ago I’d remember I own it?  There’s no way.  And honestly, it’s not even displayed in a prominent part of my house.  But I’ll have this picture, and one day when my kids are old enough, I’ll tell them about these individuals and how they shaped their mom.  I look forward to pulling out this picture when my kids are older and telling them the stories of how their mom’s youth.

Print those photographs.  You won’t regret having your story told.